Muscle fibre type of the thoracolumbar and hindlimb regions

Knowledge of muscle fibre type (MFT) distribution can be very helpful in clinical practice to direct diagnosis and treatment. With information from this study, exercises can be targeted more specifically to a muscle by choosing the amount, speed and resistance of an exercise. Muscles exist in different proportions of MFT-I (slow twitch) or MFT-IIA and -IIX (fast twitch) fibres.

The aim of this study was to determine the MFT distribution of the mm. longissimus dorsi, multifidi, iliocostalis, mm. sacrocaudalis dorsalis lateralis (SCDL) and medialis (SCDM), psoas major, psoas minor, gluteus medius, biceps femoris, and diaphragm. The authors were interested if the tail head muscles: SCDL and SCDM are functional as anatomical extensions of mm. multifidi in quadrupeds.  For this study 11 healthy adult horses (5 Quarter horses, 4 Arabians, and 2 Thoroughbreds) were used. Fibre type proportions between these different horse types; Arabian (endurance) and Quarter (strength) were also examined.  Post mortem biopsy samples were taken from the muscles listed above.

The deep epaxial muscles and the hypaxial muscle m. psoas minor had almost equal MFT I and II proportions to mostly MFT-I suggesting a role in postural control for core stability. The consistence of MFT-I was the highest in SCDM and the diaphragm. The proportions in psoas major, iliocostalis, longissimus dorsi and the hind limb muscles consisted mostly of MFT-IIX important for locomotion.

There was not much difference between the breeds. In line with the hypothesis Quarter horses had more MFT-IIX fibres in psoas major and Arabians had more MFT-I fibres in m. longissimus dorsi. 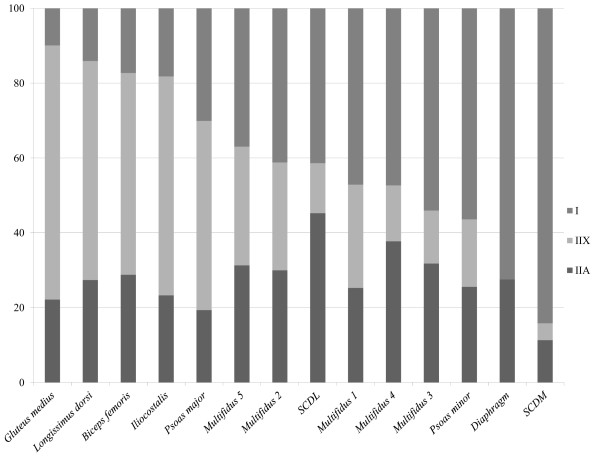 About the author of this summary:
Dierfysiotherapie MARLY

More summaries from this author